“It is wonderful to be able to stand here in this spot and to think about the times the Chairman and I drove past this field and he pointed to the fields and said ‘Here’s what we hope to do,'” said U.S. Senator James Lankford at the groundbreaking ceremony.

“The historical connection between Canada and CPN is the people,” Pro-Pipe USA-LLC’s Patrick Lamoureux said. “This commercial trade will lead to ongoing commerce between CPN and Canada via Pro-Pipe USA LLC and its Canadian business interests.”

The company’s production facility is in the initial stages of construction, with CPN retaining ownership of the facility while subleasing it to Pro-Pipe USA LLC through contractual tenets laid out by the U.S. Helping Expedite and Advance Responsible Tribal Homeownership Act, or HEARTH Act. The act restores the authority of federally recognized tribes to develop and implement their own laws governing the long-term leasing of Indian lands for residential, business and other purposes.

“Iron Horse’s location is ideal for logistics, access to markets while the economic environment is ideal,” Lamoureux said. “The (Oklahoma) region offers a similar economics to Canada in terms of an area that is rich in amazing people, oil and gas, and agriculture.”

Pro-Pipe USA LLC expects operations to begin by summer of 2020, including expansion with its affiliate partners, thus creating additional employment.

“We can never predict the weather, but Pro-Pipe USA LLC will be producing their pipeline products within the next year,” CPN Economic Development Director James C. Collard said. “This is not the only great news, as many know that one manufacturing job tends to support and multiply three or four outside jobs as well.”

The industrial park has been in consideration for several years and first saw significant progress when a 2008 independent feasibility study indicated the park was worth pursuing. The feasibility study was followed by a detailed econometric analysis by Professor Joseph Kalt of Harvard University, which revealed an industrial park would have a significant economic impact on the region.

Those studies served as the basis of the Tribe’s application for an Economic Development Administration grant. In 2011, CPN was awarded a $1 million EDA grant to build infrastructure to support development of the industrial park.

By developing Iron Horse Industrial Park as a destination for manufacturers and those participating in international trade, CPN looks to increase its ability to be a job creator and supporter in east central Oklahoma.

“The vision for this park has really been a driving force to say ‘Why couldn’t we do international commerce right here?’ And the answer is, you could, just no one has,” said Lankford. “So to be able to open this park up, let’s get rail line to it, let’s start this vision, start employment in this area and let’s have the vision of what we’re doing here reach out across the entire globe, it’s now begun.”

Iron Horse’s success is critical to the re-opening of the line, which can provide an east-west connection of four major north-south rail corridors to significantly enhance regional commerce.

Senator Lankford noted that the Iron Horse opening would be an anchor for development along the rail line that runs into southeast Oklahoma. The industrial park’s northern border touches the North Canadian River, where a rail bridge washed out in 1994 before AOK-CPN and federal partners worked to re-open it in 2013. Then-Congressman Lankford was on hand for that commemoration ceremony just a few hundred feet from where Pro-Pipe USA’s groundbreaking took place.

“For decades we have hoped to be able to get back across that river again to be able to re-establish commerce for all of southeast Oklahoma,” Lankford said. “But no one could get it done until this Tribe, AOK and our team stepped up and worked with the corps of engineers and said ‘let’s figure out how to get it done’ … To this tribe, thank you for what you’ve done.”

Iron Horse is a general-use industrial park located on the national rail line network in the center of the United States. It consists of a 400-acre site of Native American trust land owned by the Citizen Potawatomi Nation, located 35 minutes east of Oklahoma City and is a satellite site of Foreign-Trade Zone #106.

The well-planned layout of the park provides tenants with direct access to both rail and the U.S. highway system. The industrial park is less than 10 miles from Interstate 40 and within two miles of U.S. 177. Its midwest location on Native American trust land financially supports tenants. 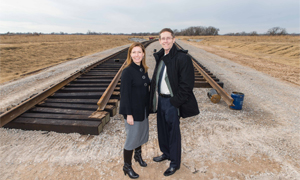