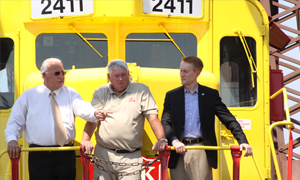 With the State of Oklahoma facing an estimated $611 million revenue shortfall during the 2015 legislative session, lawmakers from across the state were on the lookout for money that could be diverted to fund operations.

One such search led lawmakers to consider taking money from the Oklahoma Department of Transportation’s Railroad Maintenance Revolving Fund.

According to the Journal Record newspaper, the fund has more than $70 million from the state’s sale of the Sooner Sub rail line. Potawatomi Tribal member and Oklahoma State Senator Jason Smalley (R – Stroud) opposed raiding the rail funds, pointing out that the money should go for rail improvements.

“We have rail deficiencies all down southern Seminole and Pottawatomie County,” Smalley told the Journal Record. “If we could get that rail back open to the folks in Seminole, Wewoka and on down to McAlester, and open up a rail line to Oklahoma City for them, we’ll see economic prosperity like no other down there.”

Senator Smalley, a Peltier-family descendent, and the elected representative for parts of Lincoln, Pottawatomie and Seminole counties, took criticism in The Oklahoman newspaper for his stance. The state’s largest daily claimed Smalley’s opposition of raiding the fund was somehow akin to sacrificing road and bridge projects “on a long-shot bid at railroad-based economic development aimed at placating one lawmaker and some of his constituents.”

For more than a century, Oklahoma’s political system gave political weight to rural areas, many times at the expense of the larger metropolitan areas like Tulsa and Oklahoma City. In the past decade though, as both cities grew, so did their political clout. With their locales growing and attracting new jobs, it is difficult for politicians and opinion makers in the big cities to understand just how dire the economic situation is in many parts of rural Oklahoma.

The effort of A-OK railroad at reopening the Iron Horse Bridge and the rail links connecting southeastern Oklahoma more than thirty years after it was severed is a prime example of a project that is more than just a rail line. It is little wonder the economic prospects in many of the rail stops along that line withered in the years since the bridge washed out in a flood.

Yet progress is being made now that the bridge is complete. Iron Horse Industrial Park is set to bring hundreds of jobs and outside investment to the Shawnee-Tecumseh area in the coming years. It is not difficult to imagine similar economic stimulation, literally down the line, for towns whose economic prospects are of little concern to those in ivory towers in the state’s capital city.

Senator Smalley’s efforts were indeed an act of one lawmaker protecting the interests of his constituents. That is what legislators are elected to do. Many rural Oklahomans know that if their locally-elected officials don’t look out for them, especially in terms of economic development and job creation, those in the state’s largest metropolitan areas certainly will not.